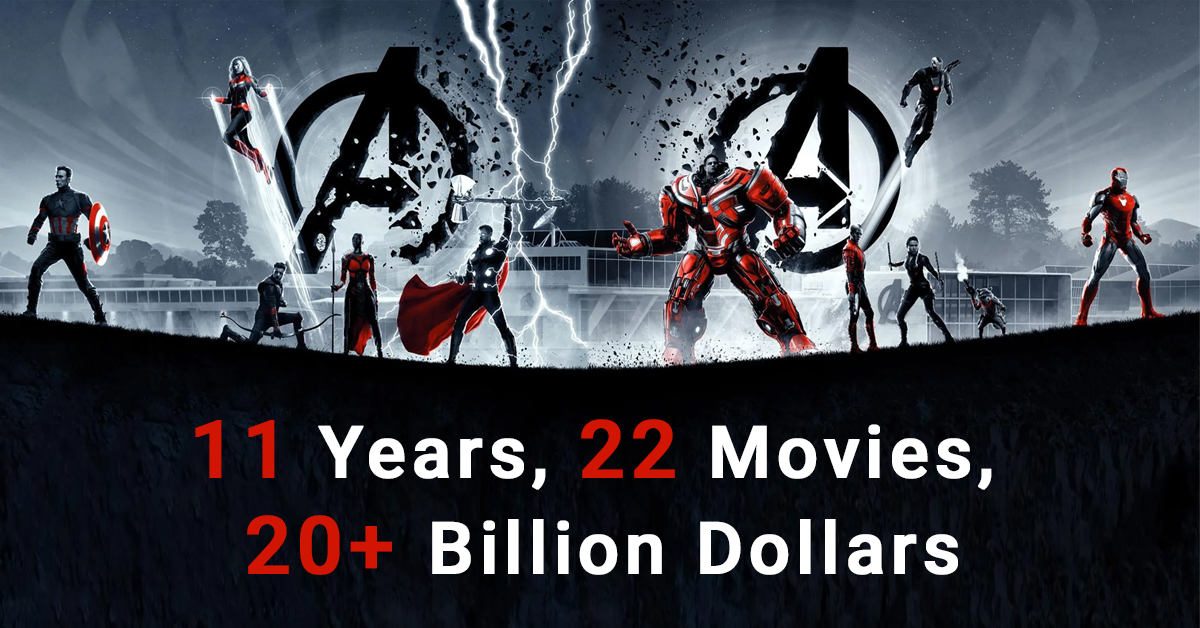 It was back in 2008 when a radically different type of movie called Iron Man was introduced to us. The story, the action, the visuals, the music (Bless AC/DC) & of course Robert Downey Jr. himself – all of it was so damn fascinating. It left us wanting more of this loud, in your face, flawed characters’ universe called Marvel.

Importantly, it’s not like it wasn’t done before. Many ‘Comic Movies’ were released before this – Fantastic Four, X-Men, several Spider-Man movies, etc. but none really were able to visualize the potential that the Marvel Universe had (except for Christopher Nolan & Christian Bale’s Batman trilogy, but that’s DC).

Marvel Studio head, Kevin Feige though made and decided to keep this vision which we now know as the Marvel Cinematic Universe or the MCU. 3 phases, 11 years and 22 movies later this MCU has garnered more than 20 billion dollars worldwide with every single movie opening to the US Box-office as number 1.

Obviously you can see that I’m a big fan, but why talk about this on our company blog? Well, the answer is quite simple – Branding,  Marketing, Advertising & Design – basically BMAD! Yup, I’m fascinated by the MCU because it proves that if you can build credible brands, tell compelling marketing stories, advertise the unmissable and design visuals that have the capacity to enthrall audiences – you can make some serious Moolah.

I’ll drive down this point with just one example – take the Avengers Infinity War & Endgame movies for example. They both are rumored to be made at an eye watering budget of 1 billion dollars. 1/3rd of this was said to be spent on Infinity War. 200 million dollars is said to be the marketing budget for Endgame. 200 million dollars people! They spent it all on Digital Marketing, Offline Marketing, TV ads, Guerrilla Marketing, in-app ads, newspapers, experiential marketing, above the line, below the line and lines of which we haven’t even thought about.

And you’ll ask what’s the result. Well, hear this:  1.8 billion Dollars worldwide is what the Infinity War has earned. Endgame is expected to fetch 800 million in the US market and close to 2 billion dollars worldwide! That pegs the combined earning of these movies to almost 4.5 billion dollars. That is crazy. That is unheard of numbers in this industry.

All this was sown with one seed called the Iron Man, 11 years ago. People believed in this idea called the MCU. They invested their blood, sweat & tears into this. They looked far & beyond to try and weave multiple stories into one. They’ve employed thousands of people who’ve been trained with one common belief of storytelling and all these have managed to entice millions of people for 11 straight years. And it doesn’t stop here. The phase 4 of the MCU is going to build on the Branding done by Kevin Feigi into an intergalactic visual treat for years to come.

What I want to drive in is, be it any business in the world – we all need to work on our core offering, irrespective of what product or service we sell. We all need to believe in it and make the people related to it – believe in it & breathe and live it. Once ready we need to put in the hard work with the bigger picture in mind. Invest, heavily, in our own ideas, in our beliefs and surely – success is ours.

The MCU only proves that if you’re crazy enough to BMAD – you can build your own universe.

Mark & Make Media Pvt Ltd is a 360 degree media company, that uses a combination of technology and design to give the best solutions for your Branding, Marketing, Advertising and Design needs.